I spoke at the Innovation in Education conference last week at Dubai College for COBIS and researchED, which was a great chance to catch up with friends and meet new people working in the Middle East. Here are a few thoughts based on the sessions I saw.

This is always a pleasure, because Becky’s book with Sam Sims ‘The Teacher Gap’ is excellent and takes to task the poor policies and practices that have beset the profession in recent years. There are massive crises in terms of recruitment and retention (with 20% the typical turnover figure per school per annum), but few people are doing something about it. Becky is. She’s also responsible for Teacher TAPP, which, if you haven’t downloaded it, do. It’s nicely addictive and is the best opinion poll on teaching out there: weapons-grade data, served daily. 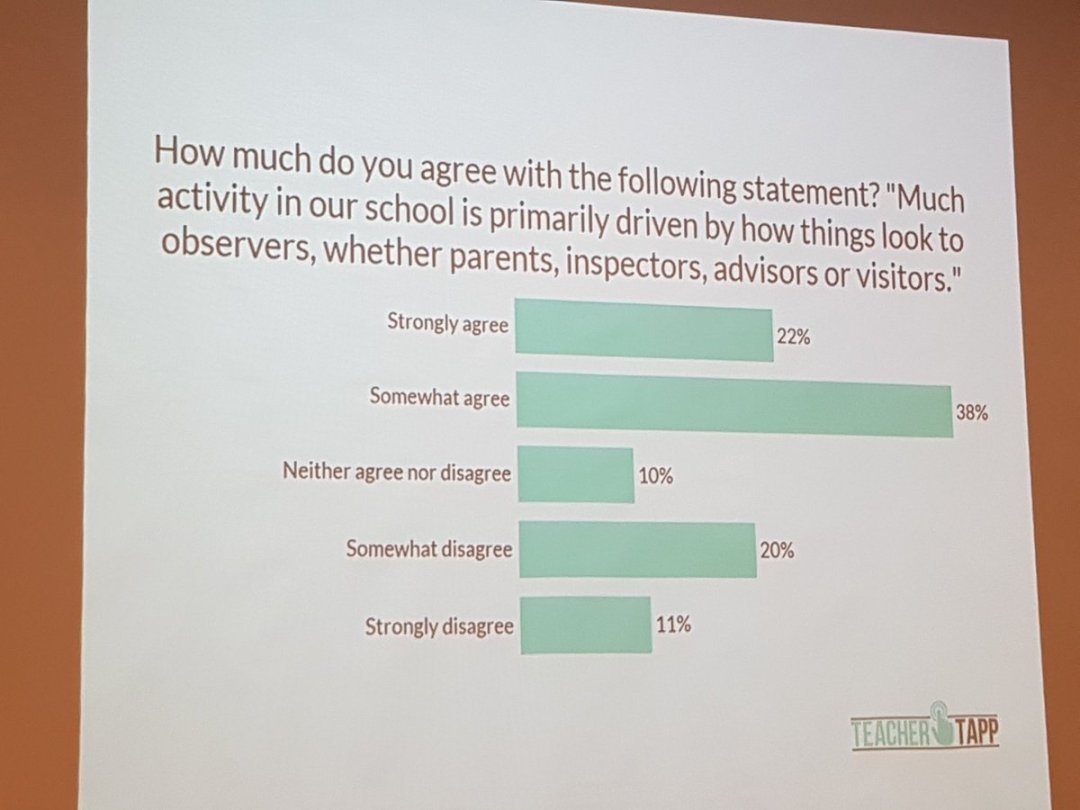 Positive education is getting a lot of traction internationally and David taught at Geelong Grammar School in Australia, which has been a pioneer in the field. They send all Year 9 pupils to a remote campus at Timbertop for a year (without any tech or much comfort) to develop resilience and coping skills, and established the Institute of Positive Education. There was definitely an evangelical feel to the room and David’s charisma fueled this, and I liked the discussion that followed from his simple question of ‘what do you most want for your students?’ This said, I’m not convinced about this approach and want to see that it means more than virtue signalling. Wellbeing is important and young people do need support, but at the moment I see more style than substance here. I’d be happy to be proved wrong, but the evidence base looks shaky to me.

A double dose of Didau, covering his two books ‘What if everything you knew about education was wrong?’ and ‘Making Kids Cleverer’. What I like about David is that he always challenges established norms and makes you reconsider everything you think you know. I don’t always agree with him, but you can’t deny the breadth of his knowledge in terms of research. What caused a storm on edutwitter was my support for this slide:

I have a lot of issues with the 21st century skills narrative because it is misleading and may even detract from skills that are more recent and need sharper focus for students (networking, for example). Is creativity a skill? No, it is a characteristic. Is it 21st century? No, it is as old as the human race. Can it be taught? I don’t think it can be taught explicitly, but can be nurtured in the right environment. In this respect, it is the product of a good education rather than a subset of a curriculum. It is the sum of the whole school experience. Needless to say, the jury is still out on this though.

No one has done more to promote effective teaching and learning in the Middle Eastern classroom than Kate Jones (not least because she runs @teachuaechat) and her book ‘Love to Teach’ is a modern classic. She offers a wealth of practical strategies to try in the classroom and has read pretty much every edubook moving. In particular I liked her own version of the TPACCK model, which looks like this: 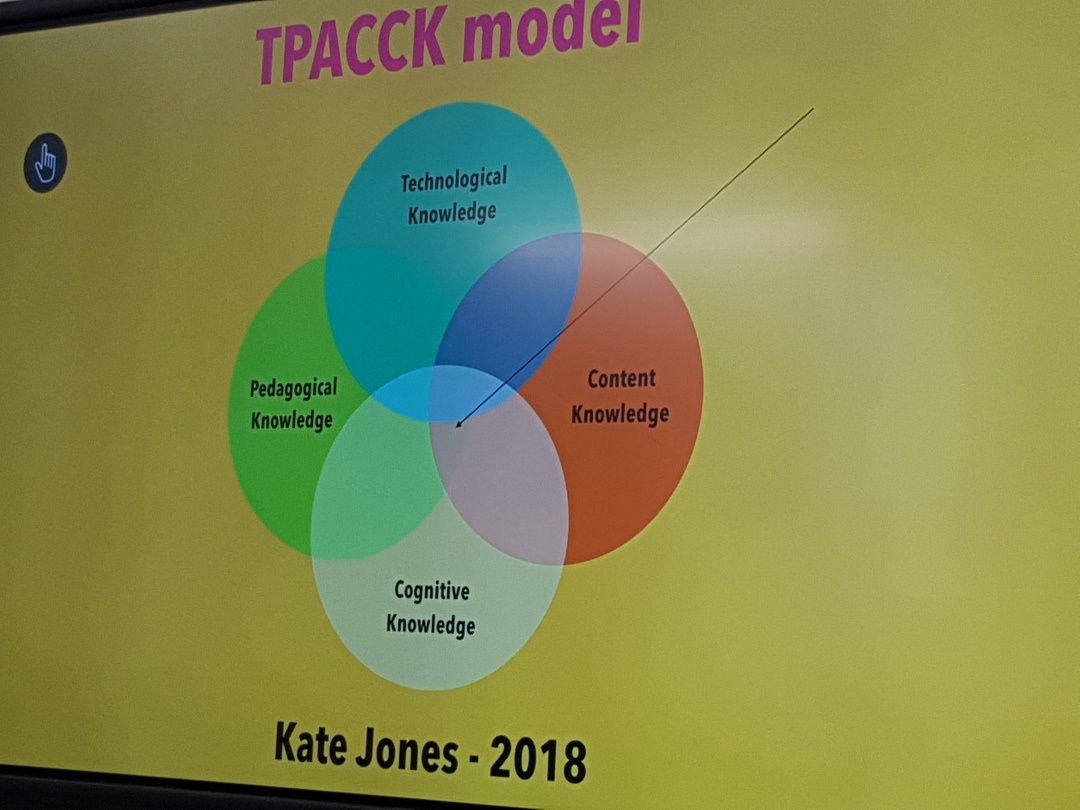 Kate’s addition is cognitive knowledge and it’s fair to argue that the sweet spot in the middle of this leads to great teaching and learning. The best way to find out more is to follow her blog here.

Mike is the headteacher at Dubai College and from what I have heard (and now seen) he is doing a great job. He has been a key figure in bringing  UAE schools together to form a strategic alliance which will bring huge benefit to pupils in the country. This isn’t easy – competition for pupils means that schools here have not cooperated a great deal in the past because they are rivals more than allies. This seems to be changing and the culture now is very different to the one I experienced in the UAE a decade ago. Mike elaborated on the efficacy of systems leadership and the extent of his knowledge on the evidence base is really robust. Definitely one to follow on Twitter.

This was really impressive. Olly is doing great work in ed-tech and recommended (and demonstrated successfully) a number of websites and apps that I haven’t come across, like Mentimeter. There was also a great discussion at the end about the level of engagement between teachers and ed-tech companies, sparked by the presence of an ed-tech rep in the room who spoke up for the companies that often get slated for failing to listen to teachers or be familiar with the needs of schools. I’ve got a long list of things to look at from this, so tweet Olly for more recommendations.

Artificial Intelligence is the Fourth Education Revolution, but what impact will it have on education? Rose Luckin is a Professor at UCL IoE and helped to establish the Institute for Ethical Artificial Intelligence in Education. She tackled some of the standard claims about AI, such as the extent to which it will consume jobs. Crucially, she pointed out that machine learning cannot understand everything, including itself, and also asserted that AI will mean a need for more teachers, not fewer. This field continues to be contentious, and although I missed the panel debate afterwards I gather it got a bit heated. It’s an area we’ll all be hearing more about, but I would like to see more people challenging the assumption that AI will be the end of us all; I want more hard evidence, less Terminator-style narratives.

I did two sessions, one (happily) titled ‘death to CPD’, and the second on the reasons for the rise of cognitive psychology principles in teaching over the past decade. In short, I find the old model of CPD (one-size fits all, one day courses and little impact for high cost) infuriating. I’ve written about this here, and argued that we need to look at under-used resources that have greater benefit and cost less.  Above all, good professional learning takes time and needs to be stretched over a year. The Teacher Development Trust is a great place to look for more on this, as is ‘Unleashing Great Teaching’ by Bridget Clay and David Weston.

On cog-sci, I am a big fan but I think it’s important that we stop to consider some of the issues that arise from its sudden and widespread adoption.  The field goes back to when Hermann Ebbinghaus started his groundbreaking research into memory in 1879, and spread further when the ‘father of cognitive psychology’ Ulric Neisser published his seminal book in 1967. This raises various questions. What caused the shift towards cog-sci, and why is it only relatively recently that it has grown in popularity? Secondly, are we sufficiently skilled as a profession to practise this? After all, how many of us had proper training in this field during ITT? Are we just an army of enthusiastic amateurs? If we embrace interleaving fully, what are the implications for the curriculum? Mark Healy (@cijane02), a graduate and teacher of psychology for 25 years, tells me that even now he struggles to understand some of the nuances of working memory – yet everyone on Twitter is apparently an expert. These are all valid concerns so I will continue to a) use cog-sci in the classroom but b) critically scrutinise whether I am getting it right. As is often the case with research, the evidence base and theory are solid, but application can be awry. To be continued…

A huge thanks to Annie Kirkaldy, Dee Saran, Sarah Lambert and all the other Dubai College staff who hosted and ran the events over two days superbly. Let’s hope it becomes a staple of the Middle Eastern education calendar.

View all posts by robinmacp